suicide is a very difficult issue. we try to steer people away from it, and often quite rightly so. we don't want to lose someone, or we think we can help that person, etc. but officially prohibiting it, in the form of euthanasia is, i think, quite wrong.

one important argument for not allowing euthanasia is that human beings have no right to do so, that we cannot claim the lives God gave us, especially because God gave them to us and that therefore they are His. man cannot laugh in the face of God and claim the ultimate power over his life and kill himself. but some problems arise here.

to begin with, should this idea really be the same for atheists? yes, one could say, because if there is a God He/She accounts for all creatures, including the atheists. but what makes the opinion of a christian more valuable of that of an atheist? and even more so, should religion really intermingle with governmental decisions?

and what about us not laughing in God's face by making the decision of life and death? people who prohibit suicide are, by doing so, deciding over other people's lives. even more so, they are often the same kind of people who will help kill people by waging wars, by reducing health care, by increasing poverty, by making all kinds of decisions that have such a profound impact on lives that those politicians are becoming pretty God-like themselves. so what's this? we can't decide over our own lives, but we can decide over other people's lives?

and are we not forgetting something? let's see. i am over 21 years old, so that means that i can smoke, drink or drive in most countries. i don't do the first two, but suppose i smoke two packs of cigarettes a day. even though i can't do it in many public places any more, i can still smoke away in the privacy of my house, or out on the streets. moreover, many of the tobacco companies have got strong (financial) bonds with governing bodies. so that means i cannot choose a calm death in a hospital environment when i am suffering too much (be it mentally or physically), but i can slowly but surely kill myself with lung cancer - which is very painful - and buy my little suicide-packages at the newsstand right around the corner. it's the irony of life, i guess. either that or the folly of man.

one final thought: let us never, ever underestimate other people's pains, be they mental or physical. we cannot feel what someone else feels, and if someone cannot bear the state he/or she is in, it is horribly cruel to force that person to go on, even if he/she does not want to. oh, and by the way, i am not simply a European attacking those naughty Americans. i am not simply interested in getting involved in some US-bashing; my concern is about our entire globe and every human being in it. aint i the noble one.


ps: long live the music of chance. i had been thinking about these things on my bike earlier this day. the minute i came home, my mp3-player played Anne Clark's song Self-Destruct, of which the first words are "Suicide is an urban disease".
Posted by P at 6:09 pm No comments:

shame it's not sharp 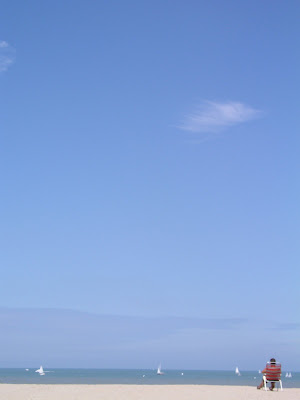 black-eyed angels swim with me

and with me. to swim, to sleep
in drowning drums of sorrows.
the junctions in this day
are tired, and roll like
sickly tides over each other;
to swim with angels, to swim
alone.

and see nothing. i built pyramids
in my mind for this, to turn around
slow-wheeling constellations
and bring them home. like an
amnesiac kid, hailing thieves who steal echoes
alone.
Posted by P at 4:44 pm No comments:

the prestige: yes
ex-drummer: yes
the black dahlia: no
the warriors: yes
Posted by P at 12:06 am 2 comments:

have you got a sec?

1. if i met myself a couple of days/years later or earlier, i think i would not like to pick my own nose in that other version of myself. which is silly, as i dont mind picking my own nose right now (nooo, not right now, but you know what i mean)

2. if i would travel to tomorrow, then i could meet myself. but, when doing so, that would imply that the me from tomorrow (= me2) would know about this, as for me2 this occurred yesterday, when he was still the me from today (= me1). the memory would then be in me2's head of meeting himself when being me1. me2 could then provide a welcome drink. but, at the same time, me2 cant have these memories for as long as me1 hasnt visited me2 yet. so, the memory in me2's head would be created at the exact moment of receiving me1's visit, which is impossible, as me2 already visited himself when he was still me1.

3. and from this it is probably so that our time-line indeed is not a procession but rather a parallel existence of all moments. for me1 cannot visit me2 if they do not exist at the same time. i guess. also, if i travel to 2017 (it is now 2007), then, if time is linear, 2007 does not exist any more for me the moment i left it. but what with all people and things in it? and if i end up in 2017 and i then go back to 2007, then does 2017 disappear at that exact moment? but that's just me perceiving it, no? but then 2007 and 2017 must exist at the same time - supposing that time-travel is possible - or i would not be able to travel between them. what with determinism then? if today and tomorrow exist at the same time, then time probably is not related, for today cannot influence tomorrow as tomorrow already exists, and so does yesterday still exist, and if i now kill myself that would not change tomorrow for if this is the day i killed myself then in that tomorrow i am not there anyway because it exists right now and and and and and

i've positively lost myself. there are probably tons of mistakes in my thoughts, but it's interesting to think about it anyway. where's my dvd of 12 Monkeys?
Posted by P at 2:50 pm No comments: