(this post will probably be as bloggy as it gets on here. i guess. but hey, i feel like writing it.)


So it was raining outside, but only slightly. Enough to feel it, not enough to be bothered by it. And yet so warm; perfect ingredients just to enjoy cycling around with some music in my ears.

Passed by the Oxfam second hand shop, and, as one is prone to do when faced with a shop every now and then, went inside. (Am i captivating you yet, reader?) At first sight, nothing that really caught my attention (buying a second-hand copied disc of Collateral - no matter how much i like the film - seemed a bit too sleazy, even when supporting a good cause), until i wandered over to the used CDs and decided i'd spend my one and a half euros (this is becoming a bit of a messy sentence, isn't it? with all those subclauses and such) (sorry about that) on any CD that looked interesting enough, that would captivate me just by its title and cover art (why, to support random superficiality of course!). It could be a real find, or it could be money lost on nothing special. It would be a bit like playing Russian roulette, without the bullets. And the gun. And the brain matter possibly smeared out all over the wallpaper. Okay, so maybe it would not at all be like playing Russian roulette. But i would still be living on the edge. Oh yeah.

This is the cover mine eye fell on: 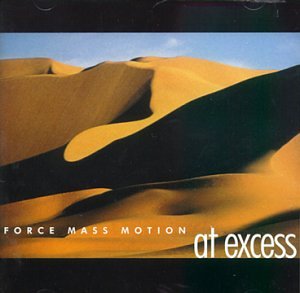 (sorry, couldn't find a better quality picture, and i have no scanner near me at the moment.)

After finding it, i kept on flipping through the CD cases a bit more, but my decision had already been made. Why? Well, look at it. It's a desert. With shadows. I love shadows. The sand is almost like the linen of a bed in early sunlight. (No, i'm not crazy. Look at this bed in early sunlight on a picture i took a month or two ago: 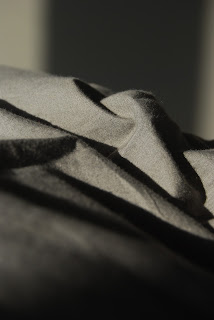 see? i've still got a modicum of sanity hidden somewhere inside of me.)

At the same time, the cover has, in a way i find hard to describe, that late 90s vibe going for it -- perhaps due to the font, or the placement of the letters in front of the picture, i don't know (the CD is in fact from 1998). Especially the "at excess"-part, of which the font is vaguely bordering on cheesy, but is not quite there yet (or, chronologically seen, is no longer there any more, as it's not a product from the late 80s or early 90s).

The title, "at excess", might well fit the soundtrack to La grande bouffe and is not what enticed me; the band name, "Force Mass Motion", did however. It sounds like a grunge band Pynchon would listen to. Or like Newton's new wave a capella group. Thanks to the Almighty Associative Powers of Alliteration (AAPA) it also reminded me of Tangerine Dream's Force Majeure, which is quite a kewl album as well. 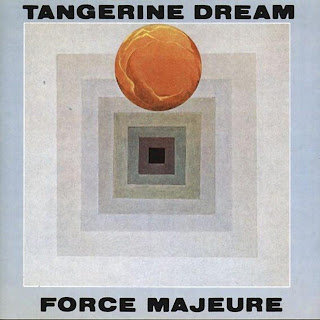 The song titles on at excess also caught my attention: we get slightly generic titles like "infinity" (the opening track), slightly smalzy stuff such as "in to you", songs titled "phunk it" and "headrock" which brought me right back to those aforementioned early 1990s, but also more abstract titles like "pressure", "solar cycles" or "check one_2" (the last one reminded me of Leftfield's Leftism for some reason) (thank you Mother Google: that reason is the song "Inspection (Check One)" on Leftism). And who wouldn't want to listen to a "solution" that lasts for over seven minutes?

Finally, the songs all last between four and a half to seven and a half minutes, which got me intrigued. There are barely any standard pop song albums that aim for such lengthy songs, and so i started wondering what could happen in those plentiful minutes. Long-drawn kick-ass intros, boring minimalistic loops, or wildly expansive landscapes filled with energetic auditory explosions -- who can tell? I would, and i adopted the stray CD that someone else no longer wanted.

Still, the joke could be on my behalf. It might be a castrato boy band singing polyphonic covers of discarded B-sides by The Prodigy. Or a lengthy lecture on the excessive impact of force mass motion on tectonic shifts, given by the highly qualified Professor Doctor Archibald Ubenwald at Trinity College in 1997. Or something.

But actually, i got lucky. (No, i won't say i dodged a bullet because then you'd start accusing me of returning to that poor Russian roulette-comparison and after all, the bullet in this case was only the loss of one and a half euros and a newly found lack of faith in my own intuition.) I got what i secretly was hoping for: electronic tracks, at times ambient, at times more uptempo, with some acid overtones here and there and hints of techno producers back when you could still call it techno. Stuff happens on the album, and though i do not think i will listen to it every day until the day i give my body back to the earth (if it still wants me after a few decades worth of sporadic fries), i am more than glad i find myself here, sitting on my bed, writing this on my laptop, listening to the song "cover of darkness" (right after "phunk it" which turned out not to be as bad as its title would have one assume), and thinking i'm just very very happy i found this CD. Even if i listen to it just once, it will be more than an hour well spent.

Even more so, lately i'm very much into many of the ambient albums released by Ultimae Records (check out their site on ultimae.com; i have no affiliations with them but i definitely recommend them, that's how happy i am with their service and their albums). The first part of my day was spent with a background auditory wall of Solar Fields' new album Random Friday. 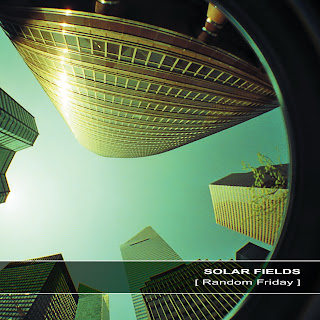 And yes, i can even see how at excess, in one way or another, is a vague precursor of many of those albums found in the Ultimae catalog. I'm not even kidding: my morning music connected to my afternooon music perfectly all because of that lovely desert rich in contrast. And everything else that made me buy this album. And the music i mentioned earlier was in my ears as i was cycling around in the rain? Greenosophy, an album composed of various songs by artists on the Ultimae label. Instead of a lack of belief in my own intuition, i've got something else entirely. And it does feel good.

So next time, be kind to your ears. Surprise them.

(ouch, that last line sounded quite patronizing didn't it? sorry!)
Posted by P at 6:32 pm