how your eyelashes are treated by the sun and form blurry little reflectionspots in front of your eyes.
Posted by P at 4:42 pm No comments:

the way a city lives, or sleeps, crawls inside and through itself. roads reading themselves a truth, houses silently guarding life within. lights, or not-lights. streetlights, windowlights. a labyrinth of bricks and empty streets, of pedestrian crossings and walkways. stoplights.

the way in which each city is an island, the suburbs its shores. and especially to think of these islands at night, when their radiant beacons shine at every corner, guiding their creatures home, or lost. to think of mist, wet and cold, foreshadowing a moist dawn hiding in every curbstone petal.

the way in which there is constant noise, or silence. cars somewhere, on a highway, sounding like nightcrushing winds, perpetually. people changing lanes, the lanes endlessly. viaducts towering on their inferior brethren.

every vein that is a street going somewhere, secretly, preaching its hoarse, cruel words of urbanic madness. broken glass mirroring every step not taken. and then the rain, washing the city clear of all its never outspoken sins, how it can breathe again. the city, greedily devouring its space, the air above and inside, greedily devouring life. like a giant, unwieldy beast steaming with neverfading power, ready to collapse on itself if needed. like a sorrowed colossus, never regretting. its buildings, its corners, its doors and windows, worn-out roads, its pandemonium of untold thought. its constant machinery. its neonlight-filled faces, all grinning to the same listless tune. its industrial pipes, feeding it, enraging it. its intimidating thunderstorms of skyscrapers. its people.

the way in which the city lives in this very night.
Posted by P at 10:28 pm No comments:

in Afghanistan, that "liberated" country, a man is awaiting trial. he will probably be sentenced to death. he converted to christianity yet was reported by his islamic family. i could go on and on and on about this, about how injust it is, about how these things have nothing to do with religion and respect for each other any more, but i will not start. i hope these words from Anthony Burgess's A Clockwork Orange will suffise. not that they will change the world. 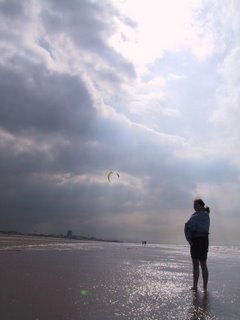 going to try something... ah, it succeeded, apparently.

reminds me of things, and is sea.

Deeply Dippy by Right Said Fred. always reminds me of that Fruitella commercial. ah. sun, sea, car driving, rocks, somewhere around the Mediterranean Sea or something i guess. always gives me back a piece of lovely past. and the beautiful sunsearocks setting, of course. let's set sail for seas of passion now, yes please. ahh.
Posted by P at 3:08 pm No comments:

have you got a second?

yet, there is more; ten thousand years in itself a blink. the distance between the planets themselves a tiny nothingness of dark matter compared to the other distances out there (and expanding and expanding, thanks to, i believe, Georges (Belgian dude!) and Albert)

and these combined, as in the almost endless morass of moments, as in clusters and clusters of entire galaxies of seconds. ten thousand years of seconds, of which any of these seconds can mean nothing at all, or everything. plus: how we experience it and what it is. and the question whether it is anything else besides how we experience it. durée and temps (horloge), the binary opposition complementing each other each and every second, each and every ten thousand years.

phew. luckily there still is Rios's Broad Daylight.
Posted by P at 8:09 pm No comments:

a first breath of spring in the air. or perhaps even summer.

brings back memories through scent and gentle skin-embracings by newfound silken air. a Proust's way of reliving by means of this refreshening, nigh on Nietzschean sky.

hail to all sheepen clouds! sheep sheep sheep interchanging sun for those fearful moments pregnant with the almost despairing hope of a sun returned. and then the sun coming back, lovely shade of nevershade.

a sentimental sigh would not be out of place here.
Posted by P at 5:24 pm No comments:

so he died two days ago. death a part of life, or death and life part of the same allness? doesn't matter.

the invention of solitude

so many people are alone out there. or sometimes not even alone, but just lonely, which is even worse.

i was told recently of an old lady who was so lonely in the retirement home she lived in that she clamped on to strangers, crying, nobody comes to visit me, i am so utterly alone. it is as shocking as it is inherently human.

and then there are the millions of people out there, looking for a friend, or a lover, or a soulmate, or just companionship. just read some magazines and you're very likely to read letters of people complaining about this problem or placing ads, hoping to find a significant other, or just any other.

the screenplay of Taxi Driver by Paul Schrader had the following introductory citation by Thomas Wolfe:

“The whole conviction of my life now rests upon the belief that loneliness, far from being a rare and curious phenomenon, [...] is the central and inevitable fact of human existence”

as i read that quote, some six or seven years ago now, i was immediately struck by the combination of pain and beauty, of truth modelled into the esthetic quality of words. this is reality for those millions of people out there i just described. perhaps even, this is reality for the more than six billion people out there, no matter what. solitude, loneliness, as the only certitude and sometimes refuge we are offered, we are born with. six billion souls out there, all drifting along having contact with each other or not, falling in love, dying, being born. but all inherently alone.

i cannot help but think of this as embodying some profound and startling magnificence, in all its destructive power. yet again, nobody wants to be alone, and we cannot seem to accept that in the end, we all are, despite the comfort other people can often offer us. the prettiest stories are often those of pain and darkness, and if our lives are filled with pain and darkness at the very beginning, then...

the phrase "and everything under the sun is in tune"
Posted by P at 1:53 pm No comments: